During the early years after the second world war many people had to leave the former Dutch East Indies in a big hurry. The period between 1945 and 1949 was unstable, to put it mildly. The prevailing political circumstances didn't allow families to carefully pack their personal belongings. Most of these people went (back) to Holland. But for many the European climate was not very attractive. Therefore, large numbers went to Australia, California and South Africa.
During this period also Dutch troops served in the former colony. One way or another a number of them bumped into left behind photo albums, all in all some 350. Eventually these albums have been transferred to the Royal Tropical Institute (RTI) in Amsterdam. And there they lay for decades collecting dust and waiting for ..., yes for what?
In 2013 the RTI/Museum for the Tropics decided to make an effort to return these albums to their rightful owners. They digitized the albums, set up a website (in Dutch) and displayed them there. So far 16 albums have been returned.

As I said, many people fled to other countries. They may not be aware of the RTI site and the albums displayed there. That in itself seems sufficient reason to display a number of photo's here. It is also possible to flip through the individual albums. All albums have been numbered. The relevant number is shown underneath each photo.
Below you see 20 photo's from the first 20 albums. In a few cases "text has been added". Obviously the chance that someone recognizes one of these persons is 0,00001% or thereabouts. Therefore, I would hope that people with a background in the former Dutch East Indies will have look at the RTI site. Or if you know someone with such a background... In case you recognise someone or a situation, please report it to the RTI. Alternatively you can email me at patmiebies at gmail dot com or even better, comment at the bottom of this post. On behalf of a few hundred orphaned albums, thank you! 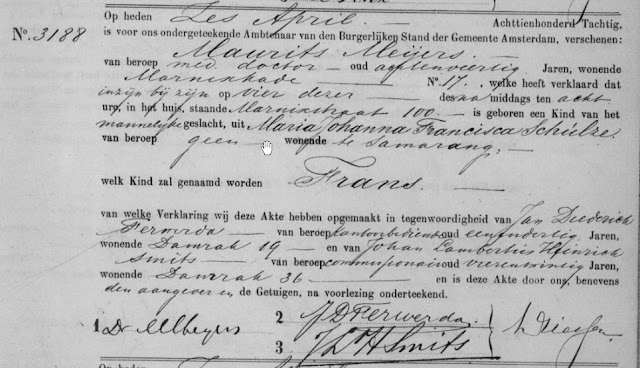